It was opening night of her first full-length composition. We had plans to get together in a few weeks for an interview and she generously offered tickets to come see her work. I was honored and intrigued – I was also nervous. I called up one of my oldest friends; she has always been my go-to on dance.

She interjects with a laugh, “You know you know nothing about dance and you need me to help explain things.”

“Oh thank you,” I say with a sigh of relief.

Later that night as we sat in our seats at HanesBrands Theater I looked around and saw a lot of familiar faces. I was fully present and ready to soak it all in. The house lights dimmed, the room grew still, breathy electronic music filled the space. Eerie blue spotlights set the mood and one by one the dancers took the stage.

This was the debut of Helen Simoneau’s LandBridge and for seventy minutes straight my eyes remained glued onto the stage.

The truth is I cannot tell you the first thing about form, technique, symbolism, (insert appropriate dance terminology here). But I can tell you how I felt. Inspired, mesmerized. energized, curious – I was totally engaged and felt a little vulnerable, too.

As my friend and I walked out of the theater that night she looked at me with a smirk as I’m certain she could see my wheels turning.

“OK, I’m just going to tell her I know nothing about dance when I meet her.” I say.

A few weeks later Helen and I first meet over coffee at Twin City Hive. Since that opening night performance she and her dance company, Helen Simoneau Danse, have received wonderful reviews for LandBridge; she’s solidified plans to take the show on the road; the dance company made its debut at the Charlotte Dance Festival; she’s collaborated with local band, Must be the Holy Ghost on a stunning performance at Phuzz Phest; she’s brought dance into the streets of downtown Winston-Salem through pop-up “Art In Unexpected Places” performances; and now, she’s finalizing details for the upcoming On Site / In Sight Dance Festival she’s organizing with a few other artists for early May.

“Can’t stop, won’t stop” seems to be the theme of her days.

I open our conversation with my reluctant admission of ignorance on the topic of dance. Later she tells me that appreciating dance is less about understanding technique and symbolism. “I love hearing about how pieces make people feel and what they take away from them. That’s what really matters.” I can relate and feel at ease.

A native of Québec, Canada, Helen Simoneau first arrived to Winston-Salem as a seventeen year old student of North Carolina School of the Arts (now University of North Carolina School of the Arts). That day we talk of her time as a student and how she didn’t think she would even get into the program. She was raised in rural Quebec, started dancing later in her adolescence, and had not accumulated the years of experience that many other prospective students had.

She first found out about the performing arts conservatory at a camp in Nova Scotia and she distinctly remembers how dismissive of her the woman who told her about the school was at that time. “She wasn’t with School of the Arts or anything but she basically said, without saying it, that I wouldn’t get in.”

That doubt was all Helen needed. That doubt sparked determination and after overcoming a few hurdles, including a train derailment on the way to her audition in Montreal, she got in.

During that first year at school, she says there was a lot of smiling and nodding and a lot of questions. There was a lot of learning what it meant to exist in a new country and within a competitive creative environment. She remembers early struggles mastering the English language along with deciphering slang and the famous southern draw. “I seriously remember asking if “off the hook” was a good thing or a bad thing.” she laughs.

There was a lot of transitioning, but with that she tapped into the realization that by staying focused and giving it her all she could thrive.

And that is what she did. Before School of the Arts she had never worked as hard or trained as hard. Her days were filled with dancing and it was demanding, but she grew leaps and bounds. Looking back she says it was where she found her artistic home and it was at School of the Arts that she became a performer. “Everytime I step back onto campus I still feel those emotions I felt as a student. I still get a little nervous and it feels so good.” 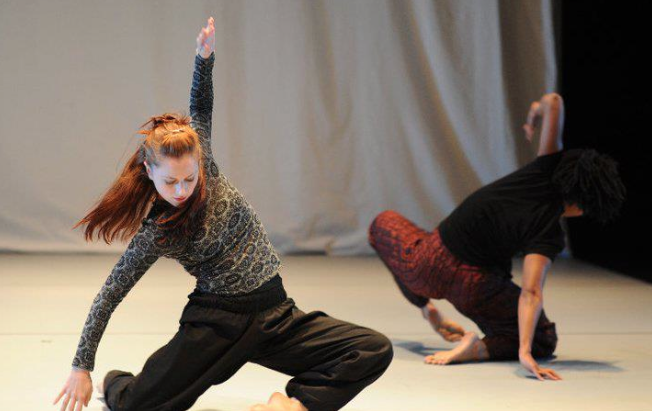 Today she holds the title of both professional dance artist and choreographer. She says that for a lot of dance artists today these two roles often overlap. I ask her if she prefers one role over the other and she shares how each presents different challenges and pulls forward different emotions.

“It’s hard to describe; I think everyone should experience the feeling of being on stage at least once in their life”, she tells me. “It takes extreme focus; it forces you to be fully present and to stay in that very moment. As a choreographer I experience a different rush. My role is to be the keeper of the piece and to uphold its mission. The dance itself is written on the bodies of the performers and my job is to stand back and witness the performance as an outsider. It is really up to me guide the narrative, craft the transitions, and decide which section informs the next. In this stage of my career I love that challenge. It is a huge responsibility and has taught me a lot about my creative process.”

She adds that over the years she has learned the importance of stepping away and letting go throughout the creative process.  “Sometimes you get so fixated on the amount of time that went into creating something that it is hard to let it go. I have learned that stepping away from the work helps me look at things more constructively and with a sharper eye.”

After graduating from School of the Arts Helen went on to earn her master’s degree from Hollins University and was commissioned by The Julliard School, the American Dance Festival, and the Swiss International Coaching Project in Zurich among others. She was a resident artist at Baryshnikov Arts Center and Bates Dance Festival, and her works have been presented nationally and internationally.

She admitted she never imagined she would return to Winston-Salem to build her career. But that is precisely what she has done and has discovered a whole new side of the city after returning with her husband, a Winston-Salem native. “When I returned in my mid-twenties I really got to know and appreciate this close-knit community. I have experienced firsthand the level of support that is available to artists here. Many of my friends moved on to LA or New York after college, as many do, to begin their careers. While I love soaking up inspiration while visiting them, I don’t envy the constant hustle required of artists to simply pay the hefty bills. That constant hustle can make it difficult to find the time and energy to do what artists love to do – create. When I was a student I would never have imagined that I could pursue a career here but that is exactly what I’m doing and I have never felt more supported.”

With that our conversation returns to that night at HanesBrands Theater when she debuted LandBridge. “I remember sitting there in the front row and it was sooo quiet. It was all I could do not to turn around and look at the audience. I mean, I thought they might be asleep,” she laughed. “But I didn’t turn around. I kept my insecurities in check.”

She said that presenting new work in this community, full of friendly faces, makes being vulnerable all the more bearable. “This is a real community and we support one another. I remember later looking into the audience and thinking “wow, I know all of these people”. That felt really special – the fact that people show up for you here.”

And it’s not just the community at large she says, it is the other local artists that really step up to support one another which leads us to her most recent project, On Site / In Sight, a new dance festival which will take place May 5th – May 7th.

The festival is  a collaborative effort between Helen and five local artists – Blakeney Bullock, Cara Hagan, Julianne Harper, Jessie Laurita-Spanglet, and Caitlyn Swett. It will include both scheduled performances and some pop-ups in unexpected places as well as movement classes. “We intentionally did not use the term “dance class” because that sounds intimidating to some. But really dance is just movement, it’s approachable, and everyone can enjoy that.”

She tells me that when creating this dance festival for Winston-Salem it was also important that they create a paid opportunity for fellow dancers and that they have wonderful sponsors that saw the value in investing in them doing so. “Through our sponsors generous support, we are able to offer free admission, keeping the arts accessible and not at the expense of the artists involved.”

Most of the festival dancers are local but they also have dancers joining in from all over the region and across the country. “We cannot wait to show them our city! I often find myself trying to recruit friends to move here. More efforts like this are exactly what is needed to feed our existing dance community, encourage young artists to stay and entice others to build their lives here.”

Just as she has (unexpectedly and delightfully) done.

To learn more about the works and company members of Helen Simoneau Danse, click here.
For a complete On Site / In Sight schedule of classes, pop-ups, and performances, click here.

Covered in mud and 🍓juice... first pick of the season was a sweet success!
You guys. 👋 The Georgia O'Keeffe: Living Modern exhibit at @curatereynolda is ⭐️⭐️⭐️⭐️⭐️ -- More scoop on this + (the return of) weekend happenings now on the B L O G 🌸 #linkinbio
"The creative life (any life, really) is about connecting, too. And it’s a journey. We don’t always know where we are going or how we are going to get there, who will travel with us or when we need to travel alone. We’re connecting the dots. It’s a process and in that process we uncover more of who we are and what our gifts are to this world." Beautiful words from a beautiful spirit whose beautiful thoughts (along with her Top 5 #WSNC Loves List!) are now up on the blog!! Come get to know @jacintavwhite , founder of The Word Project and co-founder of @snapdragonjournal 📝✨ #linkinbio
Always save room for dessert @mozzarellafellas 🍓🍌😋
I've been super quiet here lately... only because I've been a busy gal behind-the-scenes. Today on the blog | I'm spilling the beans!✨✨#makingmoves #linkinbio | 📸 @lindleybattlephotography
Come salute the ☀️ Saturday (5/6) at @oldsaleminc with @rockwateryoga & @yogammunitytribe 🌸 Class starts at 9a. ⏰ $5 donation recommended. 👍🏼Chance to win a year-long family membership! 🎟🎟🎟 Stay for @cobblestonefarmersmarket 🍓
%d bloggers like this: