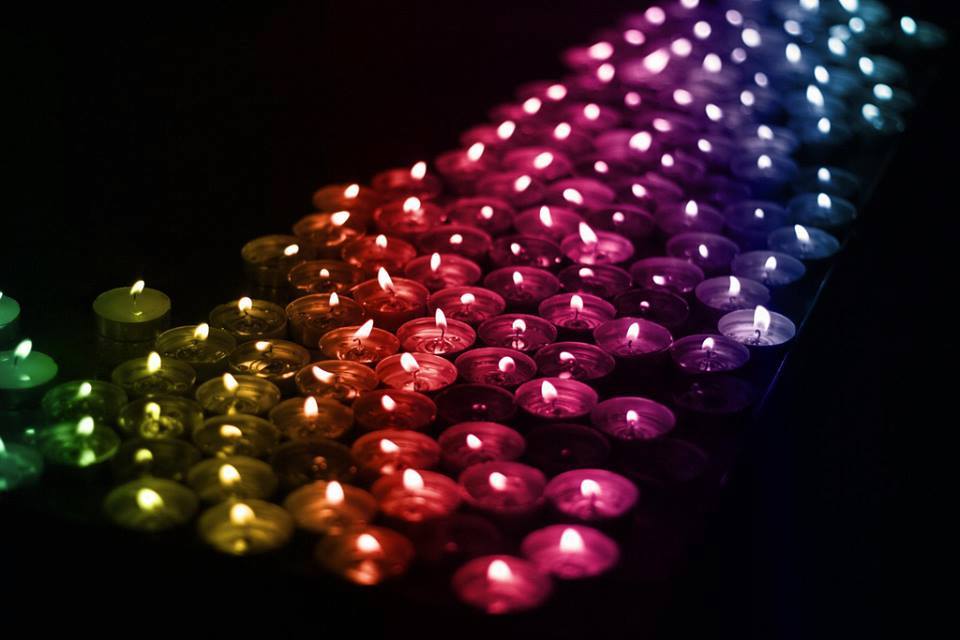 @ Corpening Plaza
>> Candlelight Vigil hosted by Pride Winston-Salem:
Shine a light; be a light. Come join others in the community to stand in solidarity in remembrance of the victims of the Orlando tragedy. Details
(7:30p – 8:30p / FREEEE!)

Shout-out to The Kimpton Cardinal for using their iconic presence to shine a light of solidarity throughout town. Read more here

@ Bailey Park / Wake Forest Innovation Quarter
>> Innovation & Cinema presents: Wizard of Oz:
It’s going to be a beautiful night to pack a picnic and a catch a classic in the park! Visit the upper lawn of newly-rennovated Bailey Park for a free screening of The Wizard of OZ brought to you by a/perture cinema in partnership with Wake Forest Innovation Quarter and sponsored by Salem Plastic Surgery Inc. This free film is part of Innovation & Cinema, a month-long series which invites you to explore the relationship between innovation and the world in which we live. Each film is creatively paired with a topic that reflects a local business or organization. Tonight’s film will feature commentary by the Design and Production department of the University of North Carolina School of the Arts. Free popcorn! Food and drink for sale.
(8:30p / FREEEE!)

@ Paz Studios
>> Glow and Flow Yoga:
Throw on your whitest and brightest yoga gear and head to Paz tonight for an upbeat and fun all levels Vinyasa Flow style class. Featuring black lights to create a colorful yoga experience, Glow Flow is more than a class – it’s an experience. Local instructors, Alysia McGinnis and Kate Renganeschi will lead you in a one hour and fifteen minute-long class full of vibrant relaxation. Amazing music and gorgeous glow provided.
(8:30p // $20 / purchase tickets here)

@ Reynolda Village
>> Reynolda Village Farmers Market:
Pop over to charming Reynolda Village for their Friday morning farmer’s market on the lower lawn of the Cattle Barn. While there be sure to stop by and enjoy the Village’s locally-owned restaurants and boutiques like Silo Bar & Bistro, May Way Dumplings, Pane e Vino, Monkees of the Village, McCalls, Belle Maison & more
(8:30a – 11:30a // FREEEE!)

@ New Winston Museum
>> The Birth of the Cool Exhibit and Live Music Featuring Diana Tuffin and Friends:
Join New Winston Museum for a special Juneteenth celebration featuring presentations from Triad Cultural Arts and special musical performance by the legendary Diana Tuffin and special guests. Like many artists, Diana Tuffin’s love for music is rooted in her family’s foundation. Early exposure to various cultures, combined with stories of her grandfather’s Central American and West Indian roots, as well as her father and mother’s educational travels fostered a love for various languages. These experiences led to Diana’s concerted effort to become a multilingual songstress. Today she presents songs in Portuguese, French, Italian, Spanish and English; this makes each of her musical interpretations unique and original.
(6p – 8p / FREEE!)

pssst…. Cobblestone’s weekday market is now underway Wednesdays from 3-6pm in the lower parking lot of Krankie’s on Fourth Street!

Get in the know via The Hub by Wake Forest Innovation Quarter: “Ending slavery took the efforts of white and black abolitionists and a lot of other people who showed courage and made decisions that weren’t popular at the time. We must remember.”Read the full story here.

@ Reynolda House Museum of American Art
>> Proceed Moon presented by Peppercorn Theater:
This is the final weekend for Peppercorn Theatre‘s production of “Proceed Moon: A Dream at Reynolda” — written by artistic director, Harry Poster. This performance depicts Katharine Reynolds and members of the Reynolda estate preparing to put on “A Midsummer Night’s Dream”. See how magic is made on the estate and how one small voice can make the moon over an enormous home shine brighter. Peppercorn Theatre at the Children’s Museum of Winston-Salem is a non-profit organization that showcases emerging professional artists and produces original theatre works in order to introduce live performance art to the children and families of Winston-Salem, North Carolina and surrounding communities.
(Saturday performances: 11a & 2p // purchase tickets here)

Insider Tip: Head to the show early to build your own fairy puppet, and stay after to discover a scavenger hunt in the garden with Rosalie’s secret journal!

@ Muddy Creek Music Hall
>> Peter Asher & Albert Lee:
Multiple GRAMMY winners Peter Asher and Albert Lee combine their talents for an acoustic evening of songs and stories. As one half of Peter & Gordon, Peter Asher’s voice “literally soared through Carnegie Hall” (Fox News), while Albert Lee has been called “the ultimate virtuoso” by Eric Clapton. Influenced from their earliest days as musicians and performers by great American artists like Buddy Holly and the Everly Brothers, Peter Asher and Albert Lee bring those influences to the fore in their first series of shows together as an acoustic duo.
Theirs is a history of song, and this shows will reflect that history.
(5p // purchase tickets here)