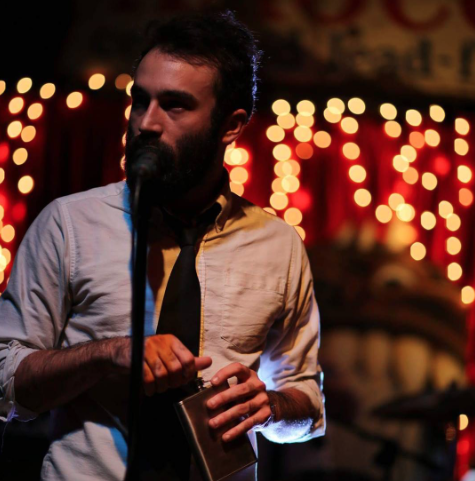 Today’s post is part of our Townies Takeover series! In this series we tap other Townies to share their personal experiences living, working, playing in and around Winston-Salem, North Carolina, through their own words and snapshots.

Though arbitrary, it means a little something to me to be a Winston-Salem townie. It’s easy to romanticize the place you’re born in. I don’t totally escape the romance. My life has been lived here entirely, split between the north side of Winston-Salem, NC, and the only side of King, NC. My childhood was decorated with Piedmont Concrete memorabilia and stories of the summers my uncles and father spent working for my grandfather. Now my nephew plays in the same floors I did, close to Wake Forest and RJR shirts. Parts of youth were spent looking to see if my dad happened to be in that City of W-S fire truck, or that City of W-S dump truck. And there was King, NC. We had a coffee shop where I would cut my teeth musically. We had gas stations where old men stood around saying terrible things. It was “country” culture– in some cases backward and in some cases delightful.

One’s identity is so sewn and decorated by the apparently mundane– where one likes to get hot dogs, what one does on Saturdays, and where one takes his or her first dates. A setting is a necessary part of what we often view life as– our personal series of rooms and parking spaces that we create significance for. In thinking of town, my own significant places come to mind.

Ogburn Station is a little railroad town down Liberty Street, past the airport. In my childhood, Ogburn Station was basically six places– the Paragon grocery store, the army surplus store, the barbershop, Willie’s, Bell Brothers, and Pulliam’s. Tucked away in a circle road were two Nail families. My parents lived next door to my grandparents. My sister and I spent our childhoods tending my grandfathers gardens, collecting black walnuts so that “the squirrels wouldn’t get them,” building scarecrows, running in woods and the like. My grandfather owned something like five lots at the end of this road. He was a country boy that had moved to Winston-Salem years ago to “find a job and get married.” It seemed he bought these plots to maintain some space. In childhood, it didn’t occur to me that we lived in the city. I figured with the gardens and the little horse stable, and the stories of how we had apparently tried owning a pony and a goat at some point, we were surely country people. But it turned out that my grandfather was maybe the original urban farmer hipster guy, and did a superior job of it. He didn’t have a tomato plant growing in a window and a picture book of log cabins. He kept immaculate gardens with every fruit and vegetable he could think to grow. He built a log cabin next door to his house (which was the house I grew up in). When I retrace the places that have belonged to me, this one was first and is the most important. Ogburn Station now looks different, having fallen by the wayside of time. It looks more like poverty. It’s more dangerous than it used to be. Many of the characters from my childhood are dead now. But at the foundation of my sense of self, this patch in Ogburn Station is monumental. (Pulliam’s hotdogs for life.)

Most disc golfers in the area are familiar with Horizon Park for being one of the only disc golf courses in the immediate W-S area. It’s located down Number 8 just before getting to Germanton. Anyone can immediately notice the disc golf course, the dog park and the playground. A little farther into the park lies the entrance to the nature trails. There are several options for how much time one feels like investing in walking. I don’t know which, but one of these options leads to one of my favorite places in the area. Off one trail stands a black cage sticking out to the side of the woods. This cage is to enclose and protect an old children’s graveyard. This sounds morbid but this is not the point. Beyond the graveyard is an open field. In the middle of it stands an old carved-up tree. For years people have found this tree and carved in their initials and perhaps the year they were there. It’s no big mystery– lots of people know this place. But in my years as a distraught teen, this was a place for me to access some vibe of purity and nostalgia. It served the same purpose as a period movie or classic literature. It put me somewhere that belonged to a vast collection of lives rather than the smallest view of myself.

Likewise, the Yadkin River was a place where sad Tyler could stop. I’d go to the park down Reynolda Rd, almost to East Bend. It’s popular in the summer, I suppose, but it’s fun to do on a weekday or in cold weather. It’s a good place to feel small when no one is around. I always did (and still do) like to climb up the concrete support wall and sit under the bridge listening to cars pounding on the road above my head. The graffiti is nasty and self indulgent, but it’s mostly easy to look away from.

There are some places that mean a lot to me that aren’t public, so I’ll describe them in minute detail. Two cabins have been important in my life– one that my Father built in Pinnacle, NC, and another that my close friend owns, also in Pinnacle. My Dad’s cabin is a sad place that I try to visit about once a year. Someone else owns it now. My friends cabin is a place where I’ve occasionally gone to sit in cold woods for hours, or sometimes days.

As a teenager in King, NC, I always heard about the Helsabeck House. It was a haven designed by Frank Helsabeck for the young and young at heart. When I was 19ish I visited for the first time. I found an old man in tall rubber boots up a ladder, doing something. He came down and met me. He told me about his house and why he built it. Frank’s house was a big rectangular barn that he bought with a GI check in the 70’s, as far as I recall. For 30+ years he tinkered away at the barn, turning it into his version of “a mansion of gold.” From the outside it was personalized with oddly colored glass bottles, signs, and just things. Upon entering, the eye didn’t know where to go. The walls were covered in letters and drawings that were given to Frank from the hundreds of visitors he’d had over the years. Against one wall sat a piano and an organ, the tops of both adorned with crowns and colored beads. Frank told me that one was for the King and one for the Queen. I played a little on his piano. From then on he referred to me as the piano player. A swing hung down from the ceiling, as did a rope. It was like a circus sometimes, with trapeze swingers zooming by at kicking height. There were bikes meant for riding inside. There were antique toys that Frank had kept from his childhood. There were steps and latters that led to windows three stories high. Journalism became an interest of mine during this visit– “New Journalism,” as it’s referred to. Sadly, Frank died two or three years later. His house is now a private place where visitors aren’t so welcome, which is about the most depressing irony imaginable, which Frank would entirely resent.

About the least unique thing a person living in Winston-Salem can do is to like Krankies. Everyone likes Krankies. Sure it’s “not the same,” and they don’t have music anymore. But the food is good as hell and the coffee is still there. Krankies was the first place I ever loitered downtown. My childhood friend, Matthew Allivato, took me down there when I was maybe 19 or 20. We both lived in King at the time and weren’t very used to the demeanor of the downtown kids. But we started coming in for the poetry slams. Then our friend, Steve Wish, started the Winston-Salem Shuffle, wherein performers could compete for a cash prize. Matt and I started doing that. After the first Shuffle I met the then sound guy at Krankies. He booked me for my first original show in Winston-Salem. I met my closest friends and previous band mates, Johnathan Loos and Quique Rodriguez-Pastor at Krankies. The shuffle granted me my first spots in some local magazines and the paper. Krankies was significant to the development of my art in Winston-Salem, which is probably true for many artists in town.

After a while I worked my way into the Garage. Tucker Tharpe, owner of the Garage, provides artists with a space to stretch and grow. I’ve played there in many forms. If downtown were my house, Camino would be my office, Aperture would be my kitchen, Single Brothers would be my living room, and the Garage would either be my workshop or my bedroom. Tucker cares a lot about the music in Winston-Salem. He’s invested in letting musical art happen through the Garage. That has made the Garage a place that is burned deeply into my identity. It’s the place where I’ve done me the most often. When I’m old, I’ll remember that painted skyline to my left. I’ll recall looking around the room at all the posters and banners when I should have been looking in the eyes of audience members.

I could have been born any place and made the best of it. I was born here, and I’ve been shaped by my surroundings and absorbed values and heritage from people nearest me. The least I can say is that I am pleased to have been born into a community that values creativity and neighborly warmth.