Abducted by pirates, looking for her lover (although she is traveling with another love interest…), Isabella certainly is someone who has the right to sing the blues. And she does, if only for a moment, which is all the time a Rossini heroine has. As one of the strongest women in opera history, she reminds us that no man, however powerful, could possibly out-wit a woman who uses her noodle!

This is the story of Rossini’s The Italian Girl in Algiers, opening Friday, March 17th at The Stevens Center, presented by Piedmont Opera. A fitting production to mark the end of the nationally noted – and locally located – opera company’s “season of strong women”.

Last week I spent some time chatting with some of the strong (bold, talented, smart, lovely…) women who will take the stage next week. Aleks Romano, graduate of the Yale School of Music’s Master program, plays Isabella, the strong Italian woman who outwits the majority of the men she encounters; and Megan Cleaveland, a recent graduate of The University of North Carolina School of the Arts’ Masters program at A.J. Fletcher Opera Institute, plays Elvira, the beleaguered wife of Mustafa, the Bey of Algiers and Isabella’s unwanted admirer.

During our chat, they shared a bit about their roles in this highly-anticipated show (get your tickets now) – and we covered the story’s subtexts which mirror topics of today. Yet another reminder of why a centuries-old art form like the opera continues to maintain its relevancy.

Here are a few highlights from our chat plus a few things you oughta  know:

This is a great first opera.

Sure, opera can be intimidating to the novice. I totally get it; I shared that here. But according Aleks Romano, The Italian Girl in Algiers is a really great first opera.

“It’s not tragic; it’s hilarious, beautiful and super colorful…quick with a lot of movement and full of universal themes that relate to everyone.”

Megan Cleaveland adds, “I think that all of the fun we have at rehearsals will shine from the stage; it’s one of the most fun rehearsal periods I have ever experienced.” The playful storyline mixed with the fresh chemistry of the cast make this production special. I think it’s going to be a hit. 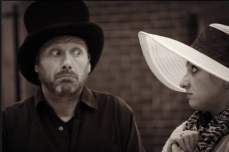 The Skinnier You Are The Fatter You Have To Become

Did you know: Opera singers do not use microphones. Even in 1,300+ seat venues like the Stevens Center. Amazing, right?

“That gets people every time,” laughs Aleks. “We really have to train our bodies to do all sorts of things in order to project our voices in these large houses.”

She explains that the full-figured opera singer is not just a stereotype. In terms of physics having a larger stature actually makes sense. “My teacher says the skinnier you are the fatter you have to become in your technique.”

As we talk through her process she shares how she has learned that self-care is essential to maintaining her most valuable instrument – her body. There is so much physicality in each performance; yoga has become her go-to for regular maintenance.

Good Luck To Anyone Who Acts Like A Sheep

Fact: In opera there is no shortage of ingénues, damsels in distress and dying dramatic sopranos. But Rossini’s Isabella – she breaks the mold. She’s smart, strong and a real firecracker.

“Literally everything she says is laced with sarcasm,” Aleks says as we laugh. She tells me to think of a Marisa Tomei type.

Aleks finds the essence of Isabella in two of her very quick yet memorable lines:

“Good luck to anyone who wants to act like a sheep” and “It is among the wives to decide how to form the husbands.”

“I wish I could make a whole aria out of those lines because they are so central to who she is and what she believes.”

This is a clear contrast to Megan’s character, Elvira.

“Elvira lives in a culture where women have zero rights. She feels very lucky to have a nice home with beautiful things, good food and to have her material needs taken care of. This was enough for her…well that is until she comes along,” Megan says as she points back to Aleks with a laugh.

“Basically my very fickle and jerky husband decides that he hates me and wants her. Isabella shows me a whole new world and I realize I don’t have to live this way – with this horrible husband – forever.”

In the end, Elvira’s husband Mustafa realizes that while he was once attracted to the newness and fire in Isabella, an independent woman is not what he really wants. At the same time, the once-submissive Elvira realizes that maybe a little fire and independence isn’t all that bad.

Aleks sees common strengths between the two women including their sexuality, intelligence, quick wittedness and ability to maneuver any situation. “The biggest difference is that Elvira has been in the situation where she lets others make the decisions for her.”

We all prefer to think that in the end Elvira finds her voice and changes her life.

Operas are sometimes dismissed by modern women as being antiquated – the female roles in particular. But once you scratch the surface, you realize that many opera themes continue to play out today.

“Gender roles really never go out of style,” says Megan. “At the end of the day, opera is all about human relationships which will go on until the end of time. There will always be something fresh and relevant to explore.”

Aleks adds, “Opera is really just a microcosm of humanity. It’s exaggerated with heightened emotion and music but at the end of the day everyone can relate.”

The relationship between Isabella and Elvira is especially noteworthy for women today. “Even though I am the antithesis of Isabella,” Megan explains, “we are very much working together and want the best for each other.”

One Final Thing! (It’s a Giveaway)

In addition to sponsoring this post, the good folks at Piedmont Opera are giving one lucky Townies reader TWO TICKETS to the production – you pick the day!

> Share this post on your Facebook page with a reason why you would love to win tickets to The Italian Girl in Algiers (running March 17th – 21st).

> Tag a friend on your post for a bonus entry!

> Entries must be made by midnight on Monday, March 13th.

> Winner will be announced Tuesday, March 14th on the TowniesWS Facebook page.

See you at the Opera!