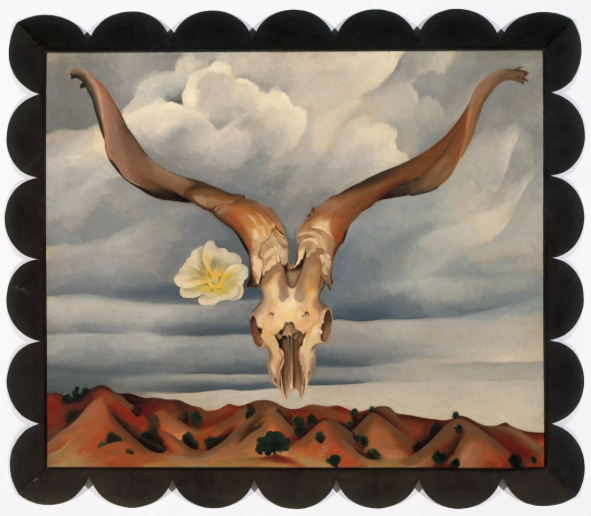 @ Reynolda House Museum of American Art
>> Georgia O’Keeffe: Living Modern
Today is opening day of Reynolda House Museum of American Art’s highly anticipated exhibition, Georgia O’Keeffe: Living Modern. And FYI: It’s the largest exhibit ever installed by the 50-year old museum, on display in five galleries.  Organized by the Brooklyn Museum, Georgia O’Keeffe: Living Modern examines the artist’s self-crafted persona through her art, her dress, and her progressive, independent lifestyle. More than 180 paintings, photographs, sculptures, and personal objects will be on view through November 19th, including jewelry, accessories, and garments from her wardrobe, some designed and made by the artist herself. The exhibition reveals the artist’s powerful ownership of her public and artistic identity and affirms that she embodied the same modern aesthetic in her self-fashioning as in her art.  Reynolda is the only venue in the Southern U.S. to host this landmark exhibition.
>> DETAILS

@ The Porch Kitchen & Cantina
>> Waffles for Wishes
Organizers invite you to keep your PJs on and just head over to The Porch Saturday morning for “Waffles for Wishes”. Proceeds from this special event will help grant a young child’s wish through Make-A-Wish of Central & Western North Carolina. Indulge in a yummy waffle buffet with loads of toppings, along with a tasty breakfast taco buffet, plus sparkling cider for the kiddos and mimosas for the grown folk.
>> DETAILS

@ Wake Forest Tennis Complex
>> Winston-Salem Open: Fill the Food Bank Day:
Bring three (3) canned goods to receive a free ticket to all qualifying matches on Saturday, Aug. 19th. All donations will support the Second Harvest Food Bank of Northwest N.C. For suggestions on which foods to donate, check out this information sheet.  Oh and did you know…The Winston-Salem Open is a charitable non-profit whose proceeds benefit many local charities.  The primary charitable partner is the Winston-Salem / Forsyth County Schools middle school athletic programs.  The Winston-Salem Open proceeds helped bring back Cross Country programs and expand Tennis to all of the middle schools in Forsyth County.
>> DETAILS

@ The Garage
>> The Genuine Kickstarter Party
After four years of traveling and playing music together, members of Winston-Salem’s own The Genuine are ready to produce their second full-length album and they need our help. So on Saturday, they’re throwing a party at The Garage where they’ll dish about the new album, share some new songs, and hopefully get your help (if you feel so moved) in closing the gap on their Kickstarter campaign goal. Free admission. Spread the word!
>> DETAILS

Can’t make the event but want to contribute? Awesome. You can do that right here.

@ Quarry Park
>> Now open – go and see!
“Great views of the Winston-Salem skyline and the cool depths of rock-encircled water are free for the asking now that Quarry Park is open off Reynolds Park Road. Local officials formally marked the opening of the park Tuesday, joining a throng of visitors who came out to see the newest addition to the park system: More than 200 acres of mostly wooded land surrounding a former Vulcan Materials quarry that has filled with water for many years.”…. continue reading via The Winston-Salem Journal

@ Minglewood Farm & Nature Preserve
>> Sunday Supper:
Craving a slow Sunday? Filled with slow food? Head just a bit north on Highway 52 and down the windy back roads to Minglewood Farm & Nature Preserve in Westfield, North Carolina for a family-style Sunday supper. Happening monthly spring through fall, Minglewood’s Sunday Suppers feature local guest chefs who create menus based around seasonal ingredients found at Minglewood and surrounding farms. This month, guest chefs Harrison Littell from Five Loaves Catering and Curtis Hackaday from 1703 have partnered up for the first-time eva on a fun Latin-themed supper. Cost is $72.00 per person and includes beverages. Funds raised will help further Minglewood’s mission to educate students on the importance of sustainable food production and environmental stewardship.
>> DETAILS

HAVE AN UPCOMING EVENT?

GIVE US THE SCOOP BY SAYING HELLO HERE.